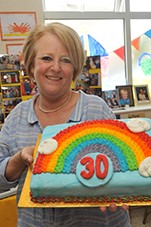 30 YEARS ON:
A TRIP DOWN MEMORY LANE FOR NEWCASTLE NURSERY
A crowd of two hundred people have celebrated the 30th anniversary of Rainbow Day Nursery, including pupils past and present, who seized the opportunity for a trip down memory lane.

The party took place on Saturday 23rd July, marking a momentous occasion in the nursery’s history. Crowds enjoyed a bouncy castle, face painting, a balloon man, a special visit from Elsa from Forzen, a magician and craft activities. 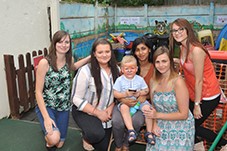 Organiser Dianne told Newcastle Life Magazine. “It was wonderful to see so many People here and quite a few ‘original’ Rainbow babies turned up for the celebration. They are now in their late 20’s and 30’s! We shared many happy memories, we even had a gentleman who was born in the original Little Crown Pub and he was fascinated to see how the pub had changed “.
“Over the years we have gone from strength to strength and have been privileged to care for and educate so many children, working closely with such lovely families. The hard work still goes on, but now we also offer a before and after school care, and have a very successful Fun Club, for school age children who attend during school holidays, which many of the children who attended the nursery come back to, but it is also open to all school age children.” 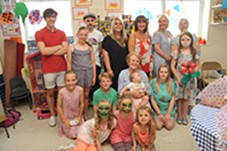 Purchased from a local brewery in 1985, Rainbow Day Nursery, on Castle Hill Road, started out life as a de-licenced public house called ‘The Little Crown’. But thanks to the hard work and forward thinking of owner Sharon, it was decided that the little crown would be transformed into a welcoming and fun environment for children to spend their time in.
Over the next 12 months, Sharon, her father and her partner Allan worked on the conversion and it was during this time that she decided to enter a completion, run by Newcastle Borough Council, which aimed to encourage new businesses in the area. She was over the moon to discover she had won the Berkely and Hay Prize of £2,000 – a tremendous help with the cost of the pub’s conversion work.
The nursery opened in July 1986 and was registered to take 27 children. Sharon and Allan got married and lived upstairs above the nursery, until five years later when they moved out in order to extend to the first floor, accommodating 50 children.

This entry was posted in News and tagged Rainbow Day Nursery: 30 Year Anniversary. Bookmark the permalink.